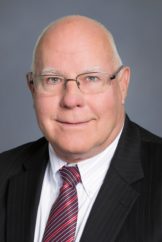 Pete Bernhard has represented many prominent Nevada individuals, organizations and businesses since 1976. His work has included major real estate transactions, including gaming and non-gaming properties, along with commercial litigation and alternative dispute resolution.

In 2001, Pete was appointed as chairman of the Nevada Gaming Commission, with regulatory and policy-making authority over all Nevada gaming licensees. He was re-appointed to serve four-year terms beginning in 2003, 2007 and 2011. He finished his service to the State on June 30, 2014 to facilitate a smooth transition for the 2015 legislative session. Prior to 2001, he served as a member and chairman of the Nevada Commission on Ethics. Pete has been a practicing attorney in Las Vegas since 1976, specializing in commercial litigation, reorganizations, and administrative law. He received his bachelor’s degree in government from Harvard University in 1971 and his juris doctor degree from the National Law Center at George Washington University in 1975. He has served on various committees and organizations, including as a Nevada representative to the Ninth Circuit Judicial Conference, as Chair of the United States District Court Magistrate Selection Committee, and as a member of the Nevada Supreme Court Advisory Committee to Review the Nevada Rules of Civil Procedure.

During his tenure on the Nevada Gaming Commission, Pete presided over the two largest combinations in Nevada gaming history (MGM-Mandalay Resorts and Harrah’s-Park Place Entertainment), along with numerous licensing proceedings for newly-constructed facilities (Wynn, Red Rock Station, South Point) and for transfers of existing properties throughout the State of Nevada. As the policy-making body for gaming matters in Nevada, Pete and the Commission evaluated major regulatory concerns presented by internet gaming, by gaming expansion into new jurisdictions around the world, by evolving sources of capital (including increased investment in Nevada from private equity firms), and by the progression of server-based gaming, mobile gaming and other technological advances.

He also represents Keep Memory Alive and the Cleveland Clinic Lou Ruvo Center for Brain Health, non-profit entities involved in research and clinical study of neurodegenerative disorders, such as Alzheimer’s, Parkinson’s, Huntington’s, and ALS.  He has lectured in continuing education and training programs for the State Bar of Nevada, the University of Nevada Las Vegas, and the Executive Development Program at the University of Nevada Reno.  He delivered a tribute to gaming attorney Bob Faiss, as part of the 2013 Global Gaming Exposition.  Pete testified on gaming matters before the 2013 Nevada legislature and worked actively with Governor Sandoval’s office developing possible compacts with other jurisdictions to regulate interactive gaming.  Since his retirement from the Nevada Gaming Commission, he has been active in serving existing licensees on gaming and corporate compliance matters.  He continues to be a resource on matters of gaming and ethics in Nevada and other jurisdictions.

Pete is a member of the Nevada State Bar, the Clark County Bar Association and the American Bar Association. Mr. Bernhard has achieved an AV rating, the highest ranking given by Martindale Hubbell, an international peer-review rating system for the legal profession.