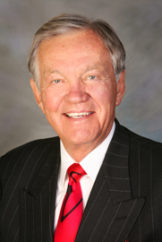 John C. Renshaw is a founder and senior partner whose practice is focused on business litigation. He joined the law firm of Vargas & Bartlett in 1964 and became a partner in 1967.  In 1994 he became a founding partner in Kummer, Kaempfer, Bonner, Renshaw and Ferrario, the predecessor firm of Kaempfer, Crowell, Renshaw, Gronauer and Fiorentino.

John has represented clients in litigation conducted in California, as well as in thirteen of Nevada’s sixteen counties and in Federal Courts in both Nevada and California. He has appeared before the Nevada Supreme Court and the Ninth Circuit Court of Appeals.

In the span of his over 50 year career, John has represented numerous suppliers and contractors in construction law cases, including Corrao Construction Company and its successor, Marnell Corrao, one of the premier hotel/casino general contractors in the country. He has also represented clients in a wide variety of cases including patent infringement, mineral rights and strip mining, condemnation, air pollution and soil contamination, and bankruptcy adversary proceedings.