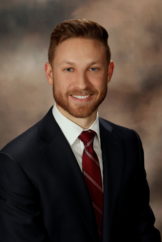 Kris Kalkowski is an attorney in the Firm’s Litigation Department.  His practice focuses on civil rights actions filed in both federal and state courts.  Before joining Kaempfer Crowell, he attended the William S. Boyd School of Law, where he served as a member of the Society of Advocates moot court team, an Executive Editor for the Nevada Law Journal, and a student attorney in the Investor Protection Clinic.  He graduated with honors and received a Dean’s Award and Pro Bono Honors Award.  Kris then served as a judicial law clerk for the Honorable Gloria M. Navarro in the United States District Court for the District of Nevada.  His clerkship spanned two years and involved hundreds of cases concerning criminal and civil matters.

Kris was born and raised in Las Vegas.  During law school, he served in the Kids’ Court Program, where he helped children learn about appearing in the courtroom and gain confidence before testifying.  He also served as a student representative with Boyd Law School’s Community Service Committee.