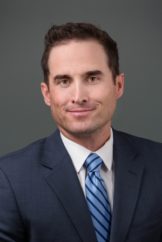 Owen is an attorney in the Transactional and Real Estate Departments of the firm. Prior to joining the firm in 2014, Owen attended the William S. Boyd School of Law at the University of Nevada, Las Vegas, and sat for the February 2014 Nevada State Bar exam, being admitted to practice in May 2014.

While in law school, Owen served as a judicial extern to the Honorable Larry R. Hicks, United States District Court Judge for the District of Nevada. He also completed an externship with the Athletics Department at University of Nevada, Reno, where he assisted the NCAA Compliance Department.

Since joining Kaempfer Crowell, Owen has gained valuable transactional experience through research and extensive document drafting and review.  Owen has represented purchasers, sellers, landlords, tenants, and developers in a variety of real estate matters, and continues to represent various merchants with respect to privileged licensing issues.