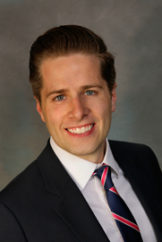 Ryan W. Daniels is an attorney in the Litigation Department of the Firm. Prior to joining the firm in 2014, Ryan worked in Houston, Texas providing litigation support for several large cases in the oil and gas industry including cases stemming from the Deepwater Horizon oil spill. When Ryan moved to Las Vegas in 2013 he focused his practice in commercial litigation, representing financial institutions in loan default cases. The Nevada Supreme Court ruled on one of these cases in Ryan’s clients favor, publishing its opinion.

While in law school, Ryan served as a judicial extern to the Honorable Alexander Williams III, in the Los Angeles Superior Court. He was also an executive editor for the Southern California Interdisciplinary Law Journal and Vice President in the J. Reuben Clark Law Society.

Since joining Kaempfer Crowell, Ryan has litigated a wide variety of cases – from landlord/tenant disputes in Justice Court to claims of police excessive force in the Ninth Circuit. In one notable Federal Court case that was successfully tried to a jury, Ryan helped persuade the Judge that if the plaintiff was entitled to damages, the damages should be limited to one dollar. Even though Ryan’s client was successful at trial and did not have to pay anything in damages, Ryan’s argument significantly neutralized the risks of trial. While he has litigated in various areas of the law, he focuses most of his practice in civil rights.