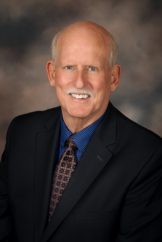 Chris Kaempfer is a senior partner of the firm and the founder of the firm’s well-recognized and distinguished Land Use and Governmental Relations Department. Chris has been practicing land use law in Nevada for over 40 years and has personally argued precedent setting land use cases in both state and federal court. The firm is recognized as Nevada’s top law firm for land use and zoning law in The Best Lawyers in America®.

Over the years, Chris’ practice has been devoted primarily to the areas of land use and zoning law, administrative law, governmental affairs, sports law, and real estate and construction law.

Since 1985, Chris has been actively involved with Las Vegas’ AAA baseball team (the Las Vegas Aviators and its predecessors, the Las Vegas 51s and the Las Vegas Stars). During these years, Chris has served the team in various capacities, specifically as Legal Counsel, as a member of the Board of Directors and/or as a part owner. He was also part owner and General Counsel to the Las Vegas Thunder Hockey Club during its years of operation in Las Vegas. Chris has negotiated on behalf of the AAA baseball team numerous contracts with various public and private entities, and has been actively involved in the myriad of issues attending the operation of minor league franchises. He has achieved an AV rating, the highest ranking given by Martindale Hubbell, an international peer-review rating system for the legal profession.

Chris coached softball for The Meadows High School Girls Softball Team, where as head coach in 2003, his team won the 2A State Championship. He has also received state wide recognition as Coach of the Year in the 2A division. To honor of his many years of coaching at The Meadows, the softball field bears his name. Additionally, he is on the Board of Directors for the National Museum of Organized Crime and Law Enforcement ("Mob Museum"), is an Honorary J.A.G. Commander for the Nellis Air Force Base Support Team, and is a member of the Board of Trustees of the Tuscany Research Institute, a non-profit organization dedicated to promoting the conservation of the environment and its natural resources. Chris also serves as a member of the Board of Directors of the UNLV Rebel Baseball Club. He is a benefactor member of the National Baseball Hall of Fame, a member of the Society for American Baseball Research (SABR), a lifetime member of the Major League Baseball Players’ Alumni Association (MLBPAA) and most proudly serves Major League Baseball’s “Baseball Assistance Team” (B.A.T.), an organization whose purpose is to aid former members of the baseball family who have severe financial and/or medical needs.